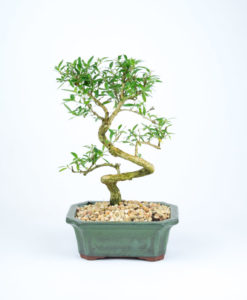 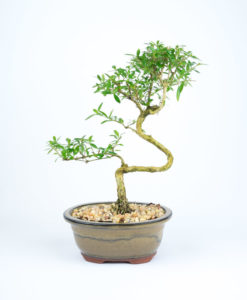 The bonsai Serissa Foetida are much loved as bonsai for their tiny flowers which may
occur 2-3 times yearly, gnarled trunks, and naturally miniature leaves.
Probably the two most common bonsai purchased by the casual bonsai buyer in America are
Juniperus and Serissa. Judging from the number of junked junipers and shriveled Serissas,
beginners would be far happier with elm and Ficus. Serissa is a notoriously fussy bonsai indoors however outdoors in shade they are a very easy bonsai to take care of. The good news is that they aren’t that hard to keep alive.

The one that you purchase will be similar to the one depicted.  Please email us if you want to see pictures of the selection we have in stock in various colored pots.

General information: These small shrubs are much loved as bonsai for their tiny flowers which may occur 2-3 times yearly, gnarled trunks, and naturally miniature leaves. Most bonsai are S. foetida, of which many cultivars are available. Probably the two most common bonsai purchased by the casual bonsai buyer in America are Juniperus and Serissa. Judging from the number of junked junipers and shriveled Serissas, beginners would be far happier with elm and Ficus. Serissa is a notoriously fussy bonsai. The good news is that they aren’t that hard to keep alive. But considering that most people buy Serissa on impulse because the plant is so spectacular at the store, the bad news is bad indeed. The plant will generally drop its flowers within a day or two. Then the plant will drop its leaves. If the grower doesn’t panic (and many Serissas are inadvertantly killed by panicing beginners who respond by drastically over/underwatering the plant) the plant will soon regrow its leaves. A power struggle then ensues. The grower soon discovers that the Serissa drops its leaves if it has too much water. Too little water. If it’s too hot or too cold. If it’s moved, or there is a shift in lighting or temperature.

Lighting: Partial sun for S. foetida, full sun for S. crassiramea. If kept indoors, needs 1000 Lux. Use of grow lamps for 12 hours daily is beneficial. Too little light will result in leggy growth.

Temperature: Hardy to zone 9. Some growers bring them in when temps drop to 50F, others leave them outside until temps are in the 20s! Ideal winter temperatures range from 50-68F. More important than the actual temperature seems to be two factors: the plant dislikes a sudden change in lighting (many die from lack of light when brought indoors) and individual plants may be show different hardinesses (a Serissa grown outdoors from youth will withstand a greater variation in temperature than a Serissa purchased from a greenhouse). If brought indoors, do not position this plant near a heat source, or it will lose leaves. If kept outdoors year round, will drop leaves as the temperatures become colder.

Watering: Keep evenly moist. It generally needs lots of water during warm weather, so much that some authorities recommend placing the Serissa in a tray of water. Others warn against this, as it encourages root rot. Serissa is not a natural water-lover like bald cypress, so a water tray should not be necessary if you faithfully water at the first sign of dryness. However, if Serissa dries out, it will soon drop its leaves. If this occurs, remember to reduce watering until the leaves return, or root rot may ensue. Some recommend misting in dry weather. Some recommend daily misting, but do not mist while in bloom as this causes the flowers to rot. Placing the Serissa on a moisture tray is another option.

Feeding: Every 10-14 days during growth, every 4-6 weeks in winter, using liquid bonsai food or halfstrength plant food. Likes slightly acid soil condiditions, so the occasional application of Miracid is appreciated.

Pruning and wiring: When in bloom, remove fading flowers to encourage further flower production. Prune as needed; the Serissa is a fast grower and may need radical or repeated pruning to maintain its shape. Will bud back on old wood; in fact, some books recommend occasionally pruning back beyond old growth to help the plant maintain its shape. Wire during the growing period. Serissa will grow air roots and is often used in exposed root or root over rock styles. Eliminate unwanted suckers extending from the base. Suitable for all styles except formal upright and broom. Suitable for extra small to medium sizes.

Repotting: Every 1-2 years in spring. The newly pruned roots will emit a wretched odor! Prune roots moderately, and use basic bonsai soil.

Pests and diseases: Red spider mite, scale, wooly aphids, mildew. Pests are usually not as much of a problem as a sudden change in conditions such as light, temperature, etc. 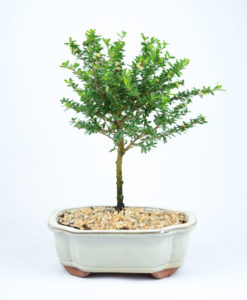 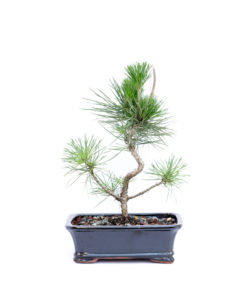 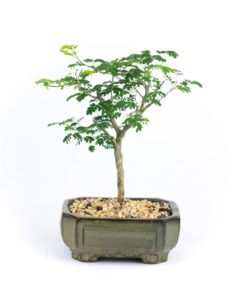 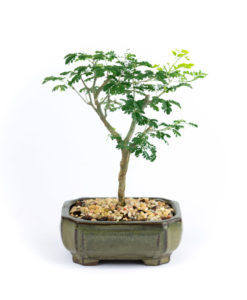 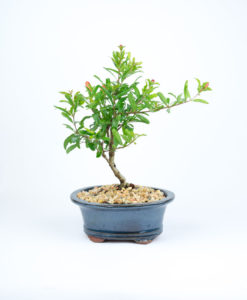 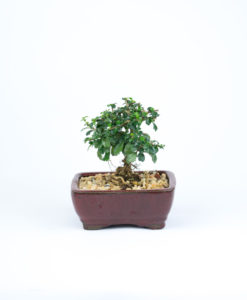 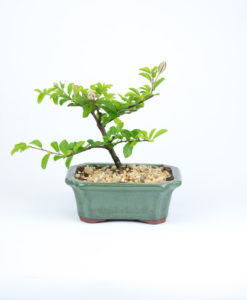 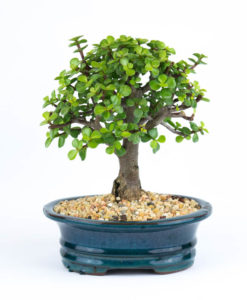 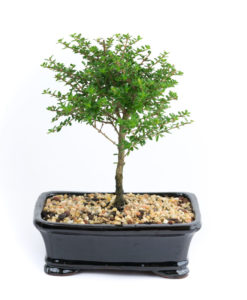